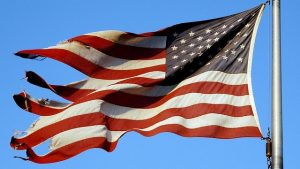 Donald Trump is president elect. Maybe putting that down in black and white will somehow make it fathomable.

On a day when a punch-drunk populace is waking up to the reality of what the U.S. election has wrought, I am deeply moved by the resilience and expressed determination of so many Americans. I know that, when I am able, I will link arms in solidarity with good people as we re-commit to doing everything in our power to meet virulent hatred with astonishing love, deep-seated fear with compassion, ignorance with a willingness to learn from one another.

But not today. Today I am afraid to leave the house.

I was born to a man who taught me from day one that my body was not my own, that my person could be violated and my spirit crushed at his whim. From him I learned that I was worthless human garbage, that my mother and brothers and sister were worthless human garbage. I was—we were—trashed in body, mind and spirit. Meanwhile, to those outside our home, this man was admired as an avowed Christian, a capable and successful doctor, a person to be trusted with the care of those who flocked to him.

Today, it feels like fifty percent of my fellow Americans have elected this man, my father, to serve as our next president. And not only that, it feels like they have done so in full awareness of his sadistic ways, in chilling indifference to the mangled lives he has left in his wake and the promises he has made to desecrate and destroy countless more.

This may sound like histrionics to those who have no context for understanding what goes on in abusive families. But here is what trauma does: it makes us feel in our bodies what the mind might otherwise manage to reason away.

Most days, with support and effort and grace, we survivors go on. But for me, today is not one of those days.