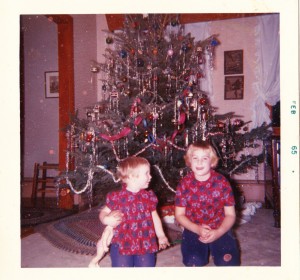 My brother Bruce decided to go for counseling after seeing the great benefit I got from EMDR and talk therapy. In an early session, his therapist gave him a children’s book to read, a story about a servant of the king who takes pity on a street urchin and invites the boy to the castle for a meal. After the boy stuffs himself at a banquet table, the servant offers him new clothes to replace his rags. They stop first at the castle baths, where the servant prevails upon the boy to discard his filthy clothes and climb into a warm tub. While the boy is soaking and the servant is off fetching clean things for him, another man, the king, comes into the room to speak to the boy.

My brother’s immediate thought, before he had time to quash it, was this: What is that man going to do to the naked boy?

Bruce told me this story while we were picking blueberries together in Maine. Blueberrying has been one of our very favorite things since we were little kids. Our aunties would set off with metal pails and milking stools, a parade of kids in tow carrying empty Cool Whip tubs. The tiny, taut berries gave us blue teeth and a row of warm pies oozing juice on the counter.

Not everything about our childhood scared us. We have our cinnamonned memories. But there are so many shadowy fragments. Hunches, nagging feelings, questions like the one that ambushed Bruce. Intimations and awful possibilities.

My oldest brother, Allon, has told me a few times on the phone recently that he’s pretty sure our father had sex in the office with his secretary, a woman from church.

While she was dying of cancer, my mother talked about the time she walked into the waiting area of my father’s medical practice and heard the sounds of rutting coming from a treatment room. “Don’t you dare open this door,” my father’s voice commanded from inside.

When my middle brother, Tedd, started counseling people in his church who were struggling with memories of abuse, he realized that he had suppressed similar memories himself. Our father used to take him along when he made house calls to female patients. Tedd was posted outside the closed door and told to give the signal if he heard anyone coming. Maybe there was more, my brother admitted.

Today Tedd chooses to remember his version of blueberrying, the good things about our father. His generous support of missionary organizations. His role in founding a Christian academy and Bible college in Maine. The relief from suffering he gave his patients. Tedd says these deeds more than make up for whatever hurt our father caused. He urges me to join him in offering forgiveness.

But forgiveness for what, I have to wonder. How can you forgive what you don’t see? What you can’t quite pull into focus?

My sister Sue confessed as an adult that she suspected our father had sexually abused her. Maybe over a prolonged period. She was reluctant to say so, even though he’d been dead for decades, because she had no proof, just a feeling. We learned to keep our feelings to ourselves in my family. Airing them was an invitation to a trampling. But Sue was brave and spoke aloud what her gut had been telling her for a long while. She wanted corroboration. Maybe our mother saw or heard something all those years before. Maybe she could shed some light, dredge up some kind of confirmation.

Our mother was familiar with our father’s predilections. At the end of her life, she talked pointedly about the ways he forced himself on her. He did so even in the presence of my siblings and me.

Although she shared a bed with our father for fourteen years, our mother could not say unequivocally to my sister, “Trust you instinct. This happened to you. I believe.” Our mother preferred to “just drop it.” She believed the past was behind us.

To her credit, my sister has not let it go. She works with an exceedingly kind therapist and sometimes, together, they use EMDR to address her history of abuse. I know from experience a very little bit about how brave Sue is to do this, and how paralyzingly scary it must be.