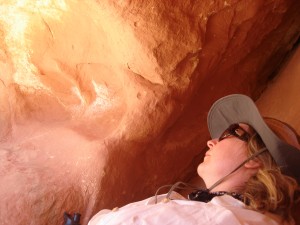 A quick recap. In September, I got my do-over Grand Canyon road trip, with a detour to Telluride, where I got a hug from the luscious Cheryl Strayed. As if that weren’t already an embarrassment of wildness, here’s what else I got out of the adventure: a publisher for my memoir.

Yep, that’s right. I sold my book, good people! If all goes according to plan, you’ll be able to buy a copy (at your local independent bookstore, natch) next year.

Some potent magic went to work for me in Colorado. First there was the Strayed encounter I described in Part 1 of this post. What happened after that is so unlikely I had to create an extra post to do it justice.

We were having coffee with the gang of folks who gather for the film festival every year at our friend Nancy’s house. It was our last morning in Telluride. My husband Andy and I were talking with Anne and Tim, an interesting couple from Tucson we’d met that weekend. From across the room, our friend Jacqi interrupted. “Tim, did Carol tell you she’s a writer? She’s written a terrific memoir.” Before Tim could respond, she added, “Carol, did Tim tell you he’s a publisher?”

Tim and I looked at each other a little agape. Suddenly, we had even more to talk about. There wasn’t much time. Andy and I were leaving that morning for the last leg of our vacation. Tim and Anne were hitting the road for the long drive back to Tucson. But the more Tim and I talked, the longer we lingered. I filled him in on the plane crash, tried to give him a quick gloss of my family history, explained how I got into therapy after 20 years and how EMDR turned everything around for me.

He said he’d love to read the manuscript. I emailed the file to him when we got home from our vacation. I figured, if nothing else, I’d get the input of someone who knows the publishing industry inside and out.

I let Tim know there were a few literary agents who’d expressed interest in my book. I’d been sending out queries for months, and some of the agents I’d contacted had asked to see the full memoir. Three of them were still holding the manuscript. Two of the three hadn’t emailed me in quite a while, but I had to assume they were still interested. These days, agents are besieged. Everyone and their mother has a book to sell, which means the sifting and the reading take a long time. I wasn’t firing off impatient emails (yet), but it was getting harder to sit around waiting for someone to bite.

Meanwhile, Tim called to tell me he loved the book. He’d showed it to Anne and she loved the book.  He was sure an agent would want to represent me. He’d been an agent himself for ten years before starting the press, so I figured he would know. He asked that I steer my agent, when I got one, in his direction, because he’d love to publish the book.

I don’t know why I hadn’t considered the independent press option before. I’d gotten it stuck in my head that I’d either sell the book to one of the commercial houses or publish it myself. I really, really, really didn’t want to go the self-publishing route though, because it’s so incredibly hard to get those books seen and reviewed and read. Even though a large percentage of the books on my shelves were published by small and university presses, I hadn’t even investigated the option for my memoir.

Turns out it’s a really, really, really good option.  Tim’s press publishes only six titles per year. He caps it there so he can stay personally involved in the editing, production and promotion of each one. He hand-picks the books he wants to put out into the world, and because he believes so strongly that those books matter, he works hard at getting them noticed and keeping them in print. He has a team of publicists and social media folks working with his authors, and he partners with agents who specialize in the subsidiary rights he doesn’t handle himself.

I had to ask myself what else I was holding out for. Especially in light of the fact that only one of the three agents sitting on my manuscript managed to reply to the email I sent informing them that a publisher was interested.  I’d gotten a lot of positive response over the course of many months querying agents. Nearly half of them had asked to see the book. Some were initially enthusiastic, but nobody was saying: You’re our girl! I figured an agent needed to be jumping up and down about my memoir to even get it past the lobby of one of the big publishing houses.

The agents I’d contacted weren’t exactly jumping up and down. But Tim was.

So I jumped too. Not right away, mind you.  First I had to get past the fact that it all felt too easy. An enthusiastic publisher with a great track record had practically fallen into my lap. Shouldn’t I be struggling harder to get my first book sold? Knocking on doors until my knuckles melted? Wasn’t I supposed to make a blood pact with an agent?

Nah! I finally let myself yield to the serendipity of the thing. I called Tim and suggested we go for it. No reason we shouldn’t take matters into our own hands instead of waiting around for an agent to get involved.

He patiently answered a million questions and walked me through the details of a publishing agreement. I hired an IP attorney through California Lawyers for the Arts to review my contract. Then I signed on the dotted line and collected the first part of my advance. Yes people, I said advance. From an indie press. It’s far from a major payday (more like a few bottles of rare wine), but it’s a clear indication that Tim is invested in me and my book.

Can I get a Woo-hoo?

This year will be about editing, finding a new title, settling on a cover—all the things it takes to get the manuscript into its final form. Then the pre-publication promotion will kick in during the months leading up to a spring or early summer 2016 release. It’s still hard to believe this thing I’ve been working on forever is actually going to become a book. About time!

Bring on the wild rumpus.