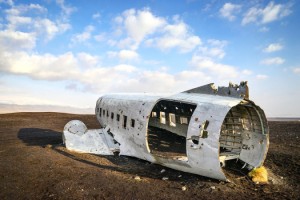 Your odds of crashing in a commercial airplane are about the same as your odds of getting struck by lightning. The risk goes up considerably in a private plane. Still, how many people do you know who’ve been in an airplane crash? I’ve never personally met anyone else who survived one. Until recently, I’d only met two people who even had plane crash stories in their families.

Imagine, then, how eerie it was to find myself in a laundry room at a housewarming party with two strangers whose parents had died in airplane crashes. Wait, it gets even freakier. We quickly discovered that each of our family’s crashes occurred in the 1970s. Both of theirs happened outside the same city in Peru, of all places. One was a commercial flight. The other, like mine, was a private plane.

Hold on, you’re saying. What were you doing in the laundry room? That’s where our friends had set up the bar, on top of the washer and drier. The space could only hold half a dozen people, and 50% of us standing in it at that moment had either been in a plane crash, lost family members in a plane crash, or both.

What are the odds?

Turns out one of my new crash compadres, Ray, lives just a few blocks down the street from me. (Cue Twilight Zone music.) The other, Mark, is an Oakland-based journalist whose three books and scads of print stories focus on human-created environmental disasters. When he told me about his involvement with the Center for Investigative Reporting (CIR) in Emeryville, that was the last straw. My mind was fully and officially blown.

Here’s why. The Executive Director of CIR is Robert Rosenthal—a journalist with a long and storied career that’s included executive editor positions at the Philadelphia Inquirer, the San Francisco Chronicle and the Chauncey Bailey Project. Before he became an award-winning fancy-pants, though, Rosenthal was a reporter for the Boston Globe. After our plane crashed in October 1979, it was his byline on that newspaper’s coverage.

What this means, in case you’re having trouble tracking all the woo-woo connections, is that my new friend Mark, whose parents died in a plane crash around the same time as my little sister, happens to work with the guy who wrote the newspaper stories about the crash that killed her. The crash I survived 37 years ago.

I shit you not.

Mark gave me Robert’s email address and urged me to get in touch with him. He knew “Rosey” would be interested to hear from me. And guess what? He was right! I took my time contacting him, worried that a big-wig newsman wouldn’t have time for my small-potatoes story.  An hour after I finally sent the email, though, I got a reply. Robert asked if we could get together and talk. He had a vague memory of the incident, he said, and wondered if I had clips of the stories he’d written.

We met three days later in the CIR offices. He told me that once he’d read the clips I sent, memories of reporting the story came back to him. He’d spent a day in our small town outside Boston interviewing people, including a neighbor girl who’d been playing tetherball with Nancy the day before she died. He remembered how devastated everyone he spoke to had been by the news.

More than once in the course of our conversation he marveled at how infrequently this sort of thing happens. Journalists rarely get to follow up with the people they write about, he said, even though certain stories remain front of mind. To hear my version of the crash events, and to learn about my protracted struggle and how I finally got the help I needed to re-engage with life—this was clearly a moving experience for him.

As it was for me. I kept having to remind myself that I was face-to-face with someone who’d been there. Someone who canvassed the neighborhood while Mom, Dad and I lay in our hospital beds. He glimpsed a side of the events I would have missed, if not for his newspaper articles. It felt incredibly lucky and so very sweet to get the chance to connect with him after more than 35 years.

Perhaps the coolest coincidence of all is that I met these folks just a few months before the release of my memoir about the plane crash. It’s as if, once I’d got the story down on paper, the universe started putting people in my path to say: this matters.

I sent Robert my book manuscript. Once again, his reply was immediate. “Thank you Carol,” he wrote. “I just read the first few pages. The narrative is powerful, gripping and wonderfully written.” I flushed with pride.  He continued, “I think anyone who reads the first few pages will read the book. It pulls you along. . . . Congrats.”

I am here to say, alive to say: Life is brutal, enervating, raucous, stupefying, jubilant. Extremely weird. And so dear.